What’s in a Name?

While preparing the prompt book for our 2015 production of Much adoe about Nothing, I was struck by the scene in which Dogberry interrogates Borachio and Conrad. The scene involves the characters Dogberry, Verges, the Sexton (or Clerk), Borachio, Conrad and several members of the watch. The line attributions, however, are listed as follows:


What this says to me is that the printers did not change anything on these pages, they simply printed what was given them – as is the practice with modern printers. It follows then that the punctuation, spelling and capitalization on these pages also were printed as the originals were presented. If they would not change something so important to the understanding of a scene, from a reader’s point of view, as the names of the characters speaking, why would we assume or conjecture that they changed any spelling or punctuation?


There may be variations between the original copies and what was eventually printed, but I believe that these were more along the lines of misread handwriting. The spelling and the punctuation were taken from the source documents. Much like today’s Kinko’s, the employees behind the counter print what you give them, errors and all. What the printers were given were not errors. When put into practice, these devices work on stage as directions and rhetorical devices. If the printers made changes to the text, apprenticed as they were in the art of printing, not acting, did they know that their changes would translate so well in performance? They wouldn’t. They printed what was handed to them, and what they were given were the prompt books and cue scripts owned by the King’s Men. From a practical point of view, the idea that the spelling and punctuation in the First Folio are a result of printers who were not highly educated, skilled or even alcoholic does not hold any water.


This also is some evidence, although by no means conclusive, that scenes were added or changed by Shakespeare’s actors. The line attributions, in some cases, are clearly made for the actors playing these roles and not for the specific characters. It is a slip that appears throughout the First Folio, but this entire scene seems as though it was written down as it was being played. That is an exaggeration, but it smacks of being an interlopation at some point in the play’s history. That is not to say that Shakespeare did not have a hand in it, but the inconsistency of the line attributions hint that it was not written at the same time as the rest of the text.


Usually I find arguments about the physical printing of the First Folio and authorship tedious and moot since we have the plays that we have and what matters is what we do with them for our audience today, not what they meant to the playwright or his audience back then. This just struck me, and took my thoughts in this direction for once. Although The Unrehearsed Shakespeare Project will work from the First Folio, rest assured whatever role they had, Compositors A-F will not be getting any of the billing. 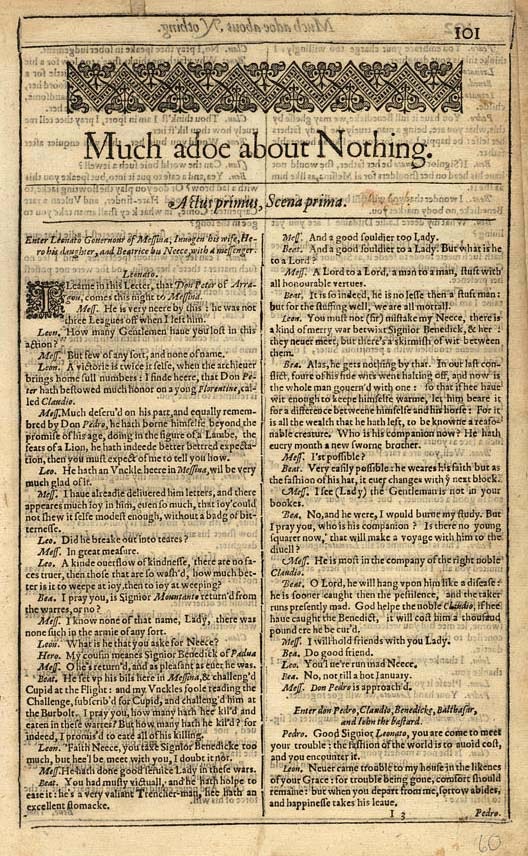 Posted by Unrehearsed Shakespeare Project at 8:24 AM No comments:

The View from the Prompter’s Table

The most hectic, stressful, teeth-itching and thankless job in an unrehearsed cue script production is that of Prompter.  That statement is made with all respect and deference due to the stage managers of this world without whom almost no theatrical production would ever go up.  However, the fact that I can make that statement shows that at least stage management’s contribution to the craft is acknowledged while the Prompter is often seen to be an obstacle to be over come, a distraction at best, or an unnecessary relic taking up valuable stage space at the worst.  But what does a Prompter actually ‘do?’


The most apt analogy that can be made is to describe the Prompter as the conductor of an orchestra.  Each actor has his or her part and it is up to the Prompter to make sure they follow it. During the performance, the Prompter sits on stage with the entire script before him (this is why some may refer to him as the Book-Holder or Book-Keeper).  He reads along while the actors are performing in case they go up on a line or ask for help or somehow skip a few pages of text.  He also lets them know if they have missed a cue or if they are speaking when they should not.  Generally, he prompts them much as an assistant stage manager would during rehearsals.


While one eye is on the script, the other eye is on the stage making sure that everyone is on stage that should be and that no one is on stage that should not.  He sees an upcoming entrance and must anticipate it being missed, in case it is, while reading along to ensure the actors on stage are in the right place.  Since it is unrehearsed, the entering actor may come on from stage left, or stage right, or from the audience, or from behind the large oak tree behind the family of six with their picnic and a dog.  Even worse, the character that is entering the scene does not speak right away, so the Prompter must see him for him to actually be ‘on stage.’


So that is one eye in the book, one eye on the stage.  One ear is obviously out for the lines being spoken and is hopefully communicating smoothly with the eye in the book.  The other ear is listening for distractions: airplanes, ambulances and fire trucks, motorcycles, trains, barking dogs, construction, party boats, crying babies, etc.


Should any distraction occur and take the audience’s attention or is louder than the speaking actors, it is the Prompter’s job to stop the show, acknowledge the disturbance and if necessary give the actors and the audience something to do until the interruption is over and the show can continue.  This can manifest itself as a song, as a quick improvisation for the actors, a joke, or a response.  Whatever may happen, it falls to the Prompter to keep the audience’s attention on the stage and on the actors so that when the disturbance is over everyone can pick up from the same point.  The disruption is no longer a disruption, but a shared, unique experience.


The Prompter must also be aware of what props should be on stage.  If the actors are handing a bag of money back and forth and someone forgot to bring the bag of money on stage, then the Prompter needs to remind the actor to go get it and give the other performers something to do until he returns.


Most sound effects also fall to the Prompter, so his hands are full as well.


The pace of the show is also the Prompter’s responsibility.  Unrehearsed actors are trained to follow the meter and punctuation and only to take pauses where they are offered in the text.  However, they are still actors and have been trained otherwise with more modern texts that lend themselves to slower speech and introspective, pregnant pauses.  Not us.  If an actor is moving too slowly or taking unnecessary pauses, the Prompter reminds him to pick up the pace.  Romeo & Juliet is supposed to be ‘the two hours traffic of our stage.’  When has an un-cut Romeo & Juliet ever come in under 120 minutes?  Unrehearsed shows are faster-paced than more modern plays and it is up to the Prompter to keep them moving forward.


Add to all this that should something happen to an actor during the show –a catastrophic cue script snafu, or an injury- the Prompter is the general understudy and must get up and perform in place of the stricken actor while still performing his other prompterly duties.  So throughout the entire performance, he must be ready and prepared to go on as any character in the play.


Now the Prompter is not the Director.  He does not stop when actors miss stage directions or blocking in the script.  He does not prompt missed simultaneous dialogue or skipped words (unless those skipped words are somebody’s cue). He does not give notes.  His purpose is to keep the show moving, keep everyone on track and keep the audience’s attention on the stage.


Eyes on the book and the stage.  Ears out for words (correct or incorrect) and distractions.  Hands on the pages, a whistle, sound effects and his water bottle.  Attention absolutely everywhere at 100% from the word ‘go.’  And what does this get the Prompter (aside from his paycheck)?  Nothing but scorn.


Actors get upset with him because they want to take their moments.  Some audience members think that he talks too much, too loudly and he should not interrupt the actors so often.  The Prompter wants to be nice to the actors -he is, after all, one of them- so he takes it easy on them only to incur the wrath of the Director for letting them get away with too much and dropping the pace of the show.  He spends the entire show on stage, gets absolutely no rest and, worst of all, gets next to no credit when the show goes well.  Only the director will say: ‘good job on keeping the pace up,’ ‘Way to stop for all those bikes.’  The actors, even knowing they had a great performance because of the Prompter’s efforts will still dread going out on stage again with him at the helm because what they do is stressful enough without someone literally looking over their shoulder.  No audience member will thank him for bringing Hamlet home in under four hours, although they wonder why the show went so fast!


This is not say that our actors are not appreciative of the Prompter.  They are.  In fact our prompters are, or should be, actors.  Every unrehearsed actor should have the opportunity to prompt as well as perform.  I know many an unrehearsed actor who dreads prompting more than performing.  I am one of them.


This also is not to say that our audience does not appreciate the Prompter.  They do.  Although, having an on stage Prompter is a new experience for many of them, and while they may understand academically the what’s and why’s of the Prompter, they are not used to, or even comfortable with, the convention. After a few shows, they get used to it.


-Andy Kirtland
Posted by Unrehearsed Shakespeare Project at 8:43 AM No comments: