Here is the third installment of my look at fathers in The Tragedie of Romeo and Juliet, and this time we will visit Frier [sic] Lawrence, the ghostly father. He is a surrogate for the seldom-seen Lord Montague as well as the spiritual father of both feuding families. In many ways, he has a greater effect upon the children of the play more than the heads of the families.


Upon his first entrance Frier Lawrence immediately holds forth about the properties of herbs and teaching the audience from his vast experience with nature.


O mickle is the powerfull grace that lies
In Plants, Hearbs, stones, and their true qualities:
For nought so vile, that on earth doth live,
But to the earth some speciall good doth give.
Nor ought so good, but strain'd from that faire use,
Revolts from true birth, stumbling on abuse.
Vertue it selfe turnes vice being misapplied,
And vice sometime by action dignified.
Within the infant rind of this weake flower,
Poyson hath residence, and medicine power:
For this being smelt, with that part cheares each part,
Being tasted stayes all sences with the heart.


This lesson about Mother Nature is a metaphor about Human Nature and the responsibility of each person to use their virtues to enrich the world, or else these virtues will turn to vice and destroy each one of us. Montague, Capulet nor the Prince make such an attempt of fatherly caution on their children, subjects or the audience. Capulet barks orders to his family and the Prince makes demands. Frier Lawrence also seems to have offered Romeo advice on women, and bemoans the fact that he was ignored.


Holy S. Francis, what a change is heere?
Is Rosaline that thou didst Love so deare
So soone forsaken? young mens Love then lies
Not truely in their hearts, but in their eyes.
Jesu Maria, what a deale of brine
Hath washt thy sallow cheekes for Rosaline?
How much salt water throwne away in wast,
To season Love that of it doth not tast.
The Sun not yet thy sighes, from heaven cleares,
Thy old grones yet ringing in my auncient eares:
Lo here upon thy cheeke the staine doth sit,
Of an old teare that is not washt off yet.
If ere thou wast thy selfe, and these woes thine,
Thou and these woes, were all for Rosaline.
And art thou chang'd? pronounce this sentence then,
Women may fall, when there's no strength in men.


He assumes the role of tutor to the young Montague, showing him how to be a good man, a good lover. These are conversations that should take place between father and son, but Montague, through his lack of attention (created through a lack of stage time) never gets to have these moments of instruction with Romeo. Perhaps this is an illustration of a situation in which the son cannot talk to his father about these things, through embarrassment or lack of communication, but this would just be conjecture.


Lawrence’s lessons seem to have worked because the next time he returns to the stage, he is ready to marry Romeo and his new love. Again, the first thing that he offers is a word of caution.


These violent delights have violent endes,
And in their triumph: die like fire and powder;
Which as they kisse consume. The sweetest honey
Is loathsome in his owne deliciousnesse,
And in the taste confoundes the appetite.
Therefore Love moderately, long Love doth so,
Too swift arrives as tardie as too slow.
Here comes the Lady. Oh so light a foot
Will nere weare out the everlasting flint,
A Lover may bestride the Gossamours,
That ydles in the wanton Summer ayre,
And yet not fall, so light is vanitie.


At this moment, he becomes a father to both Romeo and Juliet in a more concrete way. Through this marriage, he seeks to mend the feud between the Capulets and Montagues, a feat the heads of those families have been unwilling or unable to do. This is the most civic-minded action of the play. The secret wedding, overseen by Lawrence, is the only attempt to quell the strife that has been tearing Verona apart. Capulet says that he does not believe it should not be a difficult task, but aside from stopping Tybalt brawling with Romeo at the family festival, neither Capulet nor Montague do anything concrete to achieve this objective. Capulet’s proposed marriage between Juliet and Paris are more to secure his daughter’s position and that of the family – but would it have benefited Verona?


This man of the church could hope for no other gain than the well being of the polis, the community that he served, his flock, his children. This is the role of a Father, and a role that only he assays to fulfill.


When Romeo is in trouble, he runs to Lawrence for protection, not to his family. Here, Frier Lawrence has the chance to expresses tough love in his efforts to reconcile his son’s secret marriage with his public murder.


Art thou a man? thy forme cries out thou art:
Thy teares are womanish, thy wild acts denote
The unreasonable Furie of a beast.
Unseemely woman, in a seeming man,
And ill beseeming beast in seeming both,
Thou hast amaz'd me. By my holy order,
I thought thy disposition better temper'd.
Hast thou slaine Tybalt? wilt thou slay thy selfe?
And slay thy Lady, that in thy life lies,
By doing damned hate upon thy selfe?
Why rayl'st thou on thy birth? the heaven and earth?
Since birth, and heaven and earth, all three do meete
In thee at once, which thou at once would'st loose.
Fie, fie, thou sham'st thy shape, thy love, thy wit,
Which like a Usurer abound'st in all:
And usest none in that true use indeed,
Which should bedecke thy shape, thy love, thy wit:
Thy Noble shape, is but a forme of waxe,
Digressing from the Valour of a man,
Thy deare Love sworne but hollow perjurie,
Killing that Love which thou hast vow'd to cherish.
(…)
What, rowse thee man, thy Juliet is alive,
For whose deare sake thou wast but lately dead.
There art thou happy. Tybalt would kill thee,
But thou slew'st Tybalt, there art thou happie.
The law that threatned death became thy Friend.
And turn'd it to exile, there art thou happy.
A packe or blessing light upon thy backe,
Happinesse Courts thee in her best array,
But like a mishaped and sullen wench,
Thou puttest up thy Fortune and thy Love:
Take heed, take heed, for such die miserable.


Again, it is Lawrence who thinks clear enough to come up with a solution that, in his estimation, will keep Romeo safe, rejoin Romeo with his wife and reconcile the feuding families. His plans are sweeping and forward thinking, unlike those of Capulet.


Still as these plans unravel, he plots for reconciliation. Upon finding Romeo dead, his next idea is to keep Juliet safe but ushering her into a convent. Capulet, on the contrary, threatens his daughter as opposed to securing her. Once this course of action is thwarted by Juliet’s suicide, Frier Lawrence, sacrifices himself and tells all:


I am the greatest, able to doe least,
Yet most suspected as the time and place
Doth make against me of this direfull murther:
And heere I stand both to impeach and purge
My selfe condemned, and my selfe excus'd.


Of all the men in The Tragedie of Romeo and Juliet, Frier Lawrence exhibits the most characteristics of a parent, of a father figure. His concern is for those in his care, not for himself, and he treats them as such. At no point does he look exclusively for his own safety, but his attempts are to enrich others. He teaches. He offers succor. Maybe Shakespeare is trying to make a comment that the church is the real father of a community. In any event, the one character in the play who has dedicated his life to not having his own children is the only character in the play that makes a concerted effort to look out for them.
-          Andy Kirtland, Co-Founding Managing Director of The New Renaissance Theatre Company (which also produces The Unrehearsed Shakespeare Project) 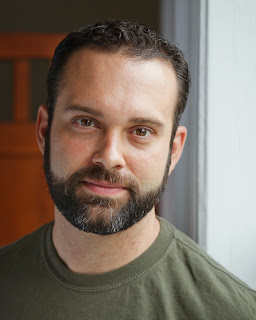 Posted by Unrehearsed Shakespeare Project at 7:58 AM No comments: