Thanks Will, and Happy Birthday

April 23 is when we will celebrate William Shakespeare's 450th birthday.  Elizabeth and I want to take this opportunity to thank him for what he has brought into our lives.

Back in the Spring of 2002, my junior year in college, I took the long road trip from Baltimore to Natick, MA to audition at the New England Theatre Conference cattle-call.  At NETC a number of theatres come together to watch hundreds of actors, mostly college students and non-union performers, do 2 monologues or a monologue and a song in a hotel conference room.  I was armed with a Lanford Wilson monologue from a role I never would have been cast as, and one of Benedick's from Much Ado About Nothing.  At this point, I had only done a high school production of Macbeth and not-so-great college productions of Hamlet and The Winter's Tale.  My only call back was for the New England Shakespeare Festival, doing a cold reading of Silvius from As You Like It for their Artistic Director Demitra Papadinis.  After getting the call that I got the internship, and driving to Demi's house in New Hampshire for a weekend workshop during finals week, I headed up to New England to live on the farm for a month, drive vans, sell t-shirts and rubber duckies, do show laundry, mow the lawn, and of course perform with a cue script.  This was the first time that I had ever heard of performing 'unrehearsed' and while like most people, I was skeptical at first, I've been performing like this ever since. -Andy Kirtland

In Summer of 2005, I auditioned for the New England Shakespeare Festival (see my previous blog post about that experience here) and fell in love with the unrehearsed cue script technique.  I had a B.A. in acting with an emphasis on classical theatre, and had just left a national Shakespeare tour.  One of the wonderful benefits of this technique is that you can continue to use it for Shakespeare's plays even without the cue scripts.  The main point that I learned is the vital importance that every actor listen to each other and remain observant.  The Bard's plays were written centuries before Stanislavsky, so he did not consider "subtext" or "magic if" in his works.  The characters never hide their true intentions from the audience and we see and hear their stories, which sometimes includes beautiful poetry and other times raunchy jokes.  I continue to teach and direct using this technique because it brings me closer to Shakespeare's words and, possibly, his original intentions.  Plus, I am always making new discoveries from researching his text!
-Elizabeth Ruelas

Our paths crossed for the first time in 2008, during Much Ado About Nothing.  Among other things, Elizabeth played Beatrice and I played Dogberry.  Our passion for this method of performing and for Shakespeare and theatre in general brought us together, and we've been together and working in this style ever since: performing, directing and teaching.

Shakespeare brought us together and will always be something that we hold in common.  Because of the Bard, we've found each other and something to share for the rest of our lives together.

Thank you Will, and Happy Birthday!

The Comedie of Errors Poster is Here!

Our poster for our upcoming production of The Comedie of Errors (designed by artist Heather Kirtland) is ready! 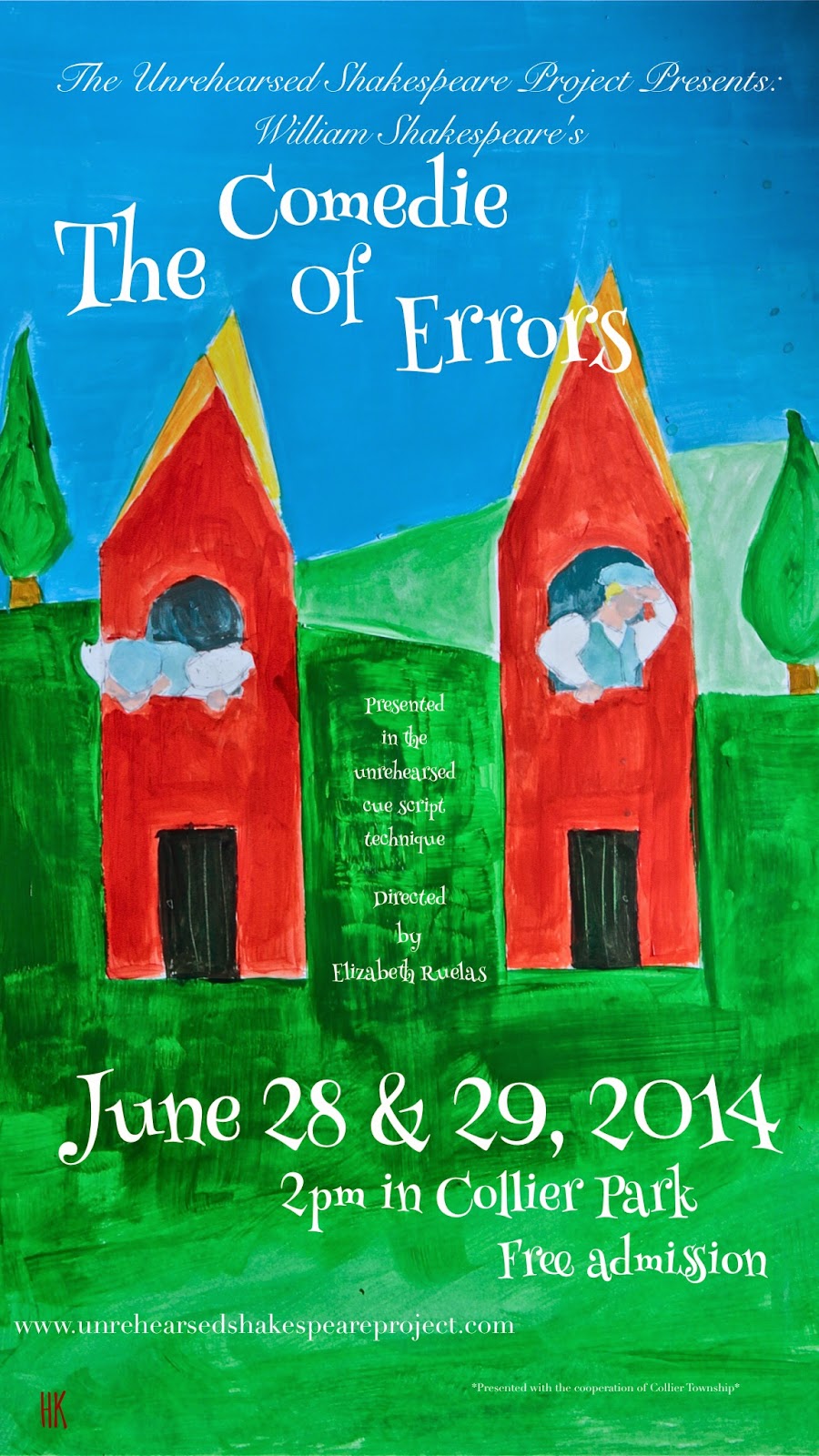 Our show has been cast, and we are so excited to introduce this group of fabulous actors to the unrehearsed cue script technique!

-Elizabeth Ruelas, Director
Posted by Unrehearsed Shakespeare Project at 10:01 AM No comments:

Here we go on the third and last section of our text session.  Let’s dive right in.

There is a quick answer to the question that Hamlet asked at the end of the last section.  Hamlet is addressed as ‘my Lord.’  The language is not complicated, but notice the variant spellings of ‘doores,’ ‘Foole’ and ‘owne.’  These can be nothing, or they can add extra syllables to the words in order to give them emphasis.  And, of course, note the capitalization of ‘Foole.’

It is interesting that here the line says ‘that he may play the Foole no way,’ when most modern texts will have the line: ‘that he may play the fool nowhere.’  No way or nowhere?  We would say to follow the text.  The sense of the line is the same which ever is used.  But ‘no way’ gives the idea that there is a way that this person being talked about is foolish.  It’s a clue for Hamlet.

…………………………………………………….sweet Heavens.
If thou doest Marry, Ile give thee this Plague
for thy Dowrie.  Be thou as chast as Ice, as pure as Snow,
thou shalt not escape Calumny.  Get thee to a Nunnery.
Go, Farewell.  Or if thou wilt needs Marry, marry a fool:
for Wise men know well enough, what monsters you
make of them.  To a Nunnery go, and quickly too.  Far-
well.

‘Marry,’ ‘Plague,’ ‘Dowrie,’ ‘Ice,’ ‘Snow,’ ‘Calumny,’ Nunnery,’ ‘Farewell,’ ‘Wise’ and ‘Farwell’ are all important to the text.  ‘Nunnery’ is again repeated, and so is ‘Farewell,’ but with a variant spelling.  There is also a lot of antithesis, words being set against each other: plague / dowrie, snow / calumny, fool / wise.  This adds a sense of balance to what is being said, a line of thought that the actor should follow while making this argument.

Here is a good point to talk about character.  Hamlet, like all of Shakespeare’s characters, does not need a method or system of creation that we are used to today.  The words that are spoken by a character, and how those words are spoken, are the character.  So, rather than having Hamlet play some sort of crazy, the actor should follow the lines, the capitalized words, the punctuation and the balance of the argument creating the relationship between the characters on stage and between the characters and the audience.  Nothing artificial needs to be layered over the scene.  This note is especially important when playing a scene, like this one, that the actors and the audience are familiar with.  Playing the text keeps everything fresh and immediate.

…………………………………………………….restore him.
I have heard of your pratlings too wel enough.
God has given you one pace, and you make your selfe an-
other: you gidge, you amble, and you lispe, and nickname
Gods creatures, and make your Wantonnesse, your Ig-
norance.  Go too, Ile no more on’t, it hath made me mad.
I say, we will have no more Marriages.  Those that are
married already, all but one shall live, the rest shall keep
as they are. To a Nunnery, go.

There are some interesting words in this block of text and they are all stage directions.  In the last section Hamlet makes a well reasoned curse against someone and the image is conjured by the words.  Here, he has a list of directions, for himself and the person to whom he is speaking: ‘pratlings,’ ‘pace,’ ‘gidge,’ ‘amble,’ ‘lispe,’ ‘Wantonesse.’  The language has become very physical.  Just by making a choice about the meanings of these words and playing them, there is a visual shift in Hamlet.

This chunk has a couple of interesting phrases.  The first being ‘God has given you one pace, and you make yourself another.’  Most modern editions change the word ‘pace’ for ‘face,’ and most times, Hamlet makes some indication of whatever make-up his scene partner is wearing.  That action fits the unrehearsed cue script technique we are working with, but is there a reason to change the word in the first place?  Probably not.  Illustrating the change of pace between one’s natural walk and some affectation is just as valid, and is in keeping with the original text.

The second line that seems awkward is: ‘I say, we will have no more Marriages.  Those that are married already, all but one shall live, the rest shall keep as they are.’  This is just awkward phrasing to get to: only one married person will die.  That gawkiness that the line engenders should be played up.  It was intended by the playwright and should not be made simple.

This points to another tenet of the unrehearsed cue script technique, one which is shared with other modern points of view.  That is to keep the simple lines simple. If a line of text or a thought is written simply, then treat it simply.  There is never any reason to complicate Shakespeare.  On the other hand, if a line is complicated, do not try to simplify it in performance.  The actor must understand what is being said on a functional level, but in performance, the actor’s struggle with the line is the audience’s struggle with it.  The audience and actor should figure out the line together.  This breeds understanding between the actors and audience and should be played up as much as possible.

Now, I will point out that at no point does Hamlet address the person he is speaking to.  He only ever uses ‘you’ and ‘thee.’  There is no title, no name, no indication from his text who this person / these people are.  What does this say about the people he is on stage with and how he feels about them?  I have no answer to offer here.  In order to say whether this is a departure from how Hamlet normally addresses the people around him or not we would have to examine the entirety of Hamlet’s cue script.  Whatever the case may be, this is something to pay attention to.

Another thing that we have passed over in this text session are the punctuations.  These help frame what the character is saying, and help drive the speaker to the end of his / her thoughts.  Colons, semi-colons, when used in prose, are not used for pauses.  They show shifts in thinking and tactics.  Only end-stops finish a thought.  In our workshops, we go through how to use the punctuation marks and what their significance are to the spoken word.

It is my hope that through these last entries there have been some opportunity to begin to understand what the unrehearsed cue script technique is and what it offers performers.  While there is definitely scholarship involved, it is only the means to find the performance inside the text.  At the core of this technique is the fact that the texts are meant to be tools for actors, and while they have value as poetry and for academic study, these are by-products.  Everything must go towards the creation of a performance.

After getting a taste of a text session, what are your thoughts?  What are your impressions from this glimpse of a text session?  Does the value of this type of close reading come through, or does this seem like an exercise in self-indulgence?  Please let us know what you think – and whatever your opinions may be, please make an attempt to see this technique in performance.  It makes all the difference.

-Andy Kirtland
Posted by Unrehearsed Shakespeare Project at 9:49 AM No comments: